Life is all about change. You change partners, jobs, countries and friends. Last Friday, I changed ideals. I ventured to one of my favorite outdoor events; Groove on the Grass, for a good dose of dancing and entertainment. The dancing was great; the entertainment was met with mixed feelings. At some point during the evening of merriment, the area was filled with many people hoola-hooping (henceforth known by its official name among members: hooping).

It was quite nice to watch; many women were quite dexterous at it and effortlessly flitted from one sequence to another, with nothing short of style and grace. Then I noticed the men. I’m not talking pretty little effeminate boys, I’m talking bearded, could-probably-start-a-fire-in-the-wild, please tell me what’s wrong with my car- men.

I was quite surprised by the sheer number of masculine oscillating hips. And even more surprised by how good they were. These weren’t a few sheep trying out the sport to find an in with these beautiful ladies, like that one jerk that always shows up to that yoga class and drools over your ass in downward dog. Nay, these were men that had seriously adopted and obviously been practicing their swirling and sashaying skills.

I have to admit that watching them at first didn’t sit well with me. It was a little like watching a female wear a strap on to jerk off. Then it hit me. This was the product of my gender-defined upbringing. When I was a kid in the 80’s, girls wore pink, boys wore blue, girls played with dolls (and hoops) and boys played with cars.

I’m pretty sure that if my brother had gone up to my dad in those days and asked “Dad, can I have a hoola-hoop?” my dad would’ve been like “No son. You don’t hoop. You fuck bitches.”

Fast forward 3 decades and in ushers a new era where such delineations are rendered null and void, and gender boxes and traits morph into masses of fun activities for all. I tried to imagine if cavemen hoola hooping in the Stone Age would’ve been allowed to procreate. Yet in today’s day and age, these norms no longer apply. In today’s world, you can hoop and fuck bitches, probably while eating your cake too. 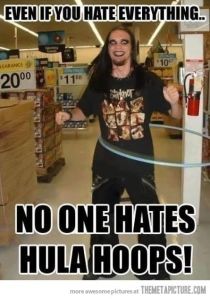